Branson plans to replace over 20 miles of water main pipes

Between 2010 and April 2021, Branson has had over 200 city wide water main leaks or breaks, according to data kept by the Branson Utilities Department.

A plan to replace water mains and pipes in Branson that’s expected to take nearly two decades to complete will begin later this year.

The plan was proposed in mid-2021 in response to aging pipes and water leaks. It’s a systematic approach to replace water pipes by neighborhood, with a total of nine neighborhoods planned.

“The number of water leaks calculated into a ratio formula with the footage of water main," he said.

Hiawatha Heights is the first neighborhood to be worked on, with an estimated cost of ten million dollars, even though it isn't one of the highest-priority neighborhoods.

One factor in deciding the order of construction was disruption to residents. For example, Lakeview Terrace was the highest priority area, but other projects will take place there soon.

“We have our Compton drive flip protection project that’s going to be taking place here shortly. Construction will start this year. So, we didn’t want to have both projects coinciding with each other," said Powell.

Since mid-2021, the estimated cost has risen as the price of materials has gone up, according to Powell.

Hiawatha Heights construction will begin late this year and is expected to be completed in late 2024.

The entire project to replace the water mains and pipes is expected to take around 20 years. Other neighborhoods that will have work done are Lakeview Terrace/Eiserman, Parnell area, Lucia Ridge, Murphy Addition, Gateway, Downtown, W. Branson Heights, Branson North and Cantwell.

Funding for the project comes from Branson’s Tourism Tax passed in 1997. 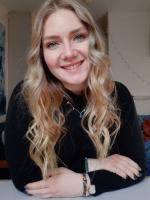 Meghan McKinney
Meghan McKinney is an undergraduate journalism student at Missouri State University. She works as a news reporter and announcer for KSMU. Her passions, other than journalism, are psychology, music, sign languages and dancing. She also runs a local music page on Facebook called "SGF Playlist."
See stories by Meghan McKinney