The World Cup is well underway. And while there's always a lot of drama at soccer's most important global event, the country of Peru has something to cheer about. For the first time since 1982, Peruvians qualified for the tournament with a November 2-0 victory over New Zealand. This weekend, however, they were not so fortunate. Peru lost to Denmark yesterday 1-0. Peru fan Daniel Alarcón is host of NPR's Spanish-language podcast Radio Ambulante. And he joins us now to talk about being a Peru fan. Welcome to the program.

DANIEL ALARCÓN, BYLINE: It's good to be here, Lulu.

GARCIA-NAVARRO: So first of all, of course, I'm sorry about the game. Peru certainly had some chances, but Denmark's keeper had some great saves.

ALARCÓN: Yeah. It hurt. My old man always used to say, asi es el futbol, which was the generic term for, such is life. And...

GARCIA-NAVARRO: You win some, you lose some.

GARCIA-NAVARRO: So despite this loss, this is a big moment for this team. And moments like that, even when they end in loss, are really what make the World Cup such a compelling contest. I want to play some of this video that the Peruvian team put out before the tournament. They said - to remind the world of who they are because they've been out of the World Cup for so long.

GARCIA-NAVARRO: The narrator is saying, "We are a beautiful country full of amazing wonders. But we've always had to play on an unlevel playing field to fight against adversity and against great rivals." It is just so beautifully shot and moving. And it had me in tears, this video. And I think it captures something about this moment for Peruvians.

ALARCÓN: Yeah. I mean, we've been away for 36 years. It's - it seemed often that we were going to be away forever. You know, I remember having conversations like that one. You know, one day we'll make it to the World Cup, ha ha ha. But it was almost like - it seemed impossible.

GARCIA-NAVARRO: You were born in Lima. But you grew up mostly in the U.S. as a Peru fan during a trying time for the national team. Give me a little bit of the history of why this team has taken so long to get here.

GARCIA-NAVARRO: (Laughter) Not that long.

ALARCÓN: ...The, you know, the - we made it in '82. We narrowly missed the tournament in '86. You know, I think a soccer team - a national team is always a reflection of what's happening in the country. And if you go back and think about Peru in the '80's and '90's, you know, we were going through years of internal violence, of terrorism, years of inflation and, you know, a spiraling economy. And it was just a bleak outlook, you know. And I think it's taken a while both for the country to stabilize and for us to produce a generation of players who don't feel like losers. And they've shaken off a lot of the traumatic losses of the past. And this is a really great group of players, a really exciting group of players. And I think I speak for many, many, many Peruvians when I say that yeah, in spite of the loss, we're incredibly proud.

GARCIA-NAVARRO: How far do you think Peru can go in this tournament with such serious competition?

ALARCÓN: No. I mean, you know, there are no easy matches in the World Cup. And you don't come to the World Cup thinking you're going to stroll through. We always talk in Spanish about el grupo de la muerte, the group of death. But really, they're kind of all grupos de la muerte, you know. I think we can beat France on Thursday, and then anything can happen.

GARCIA-NAVARRO: Daniel Alarcón, host of NPR's Radio Ambulante and a professor at the Columbia School of Journalism. Thank you so much. And, you know, (speaking Spanish). 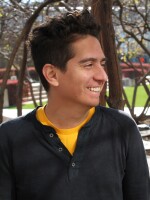