Tourism officials across Missouri hope for more money from Parson

Promoters of Missouri tourism, stung when then-Gov. Eric Greitens cut the state tourism budget in half, are encouraged that his successor wants to restore the funding.

Gov. Mike Parson made it known early in his administration that he wants to promote tourism.

Greitens cut the state tourism department budget from $20 million to $10 million in 2017. Lawmakers added $5 million dollars for the current fiscal year, and the governor recently told tourism leaders in St. Charles he wants to add another $5 million next year.

Parson said he was inspired in part by his own discovery of places to visit while running for lieutenant governor in 2016.

“As I traveled the state of Missouri, I’d find a new area, whether it be a little Main Street somewhere in some little riverfront town that I’d never been to.”

Parson said he wants to promote those lesser-known sites, while at the same time supporting Missouri’s traditional tourism hotspots.

For many out-of-state visitors driving to St. Louis, their first glimpse of Missouri is the Gateway Arch, one of the most well-known and iconic monuments in the world. Raju Ben and his family live in Chicago, and they’ve been to St. Louis on past trips, going up in the Arch and taking in other sites. This time, he came mainly for the food.

“There’s an oyster bar down the street – I’ve forgotten the name of it – I want to go back there and get some oysters,” he said. “There’s a hipster taco joint in some part of town – I forgot the name, I’ve gotta find it – they had the maybe the best or second-best tacos I’ve ever had.”

St. Louis serves as one of numerous entry points for visitors coming into Missouri. According to the state division of tourism, 42 million people visited during fiscal year 2017, which ran from July 1, 2016, to June 30 of last year. But that was before Greitens cut the tourism budget.

The tourism division won’t have visitor numbers reflecting the budget cut until later this year. But the Missouri Hotel and Lodging Association has been tracking room occupancy rates, which for the state as a whole was at 60 percent this year compared to 62 percent last year.

Local tourism backers rely partially on matching grants to spend on advertising to draw in visitors. Those grants make up 16 percent of the tourism division’s annual budget, so when the budget is larger, the percentage of funds for local tourism is also larger.

“We kind of have an approach to where, if we can get Missouri in front of you – whether it’s through television, or magazines, or radio, or whatever – we’re going to have a better chance of you coming to Missouri to vacation,” said Ward Franz, who Parson appointed as director of the division of tourism, in July. “When the budget goes backwards, we have to draw back on the way we get our name out there – that does have an effect.”

As for the NAACP’s travel advisory, which recommended against traveling to Missouri because of discrimination concerns, Franz said it hasn’t played a significant role in the overall number of visitors coming to Missouri.

“It’s something that we get calls on from time to time, there’s a chance it could have affected some conventions in St. Louis and Kansas City,” he said.

As for St. Louis, “I think you could say it possibly could [have], yes.”

One major destination that appears to have been affected by the tourism budget cut is Branson. The resort town got $500,000 in state grants during Gov. Jay Nixon’s last year in office. That figure dropped to $250,000 when Greitens later cut the budget. Meanwhile, the number of visitors to Branson dropped by 200,000 last year, and its hotel occupancy rate decreased from 51.1 percent to 48.7 percent.

“Our numbers for hotel and lodging have been off this year,” said Jeff Seifried, president and CEO of the Branson/Lakes Area Convention and Visitors Bureau. “I think that, frankly, is a direct correlation of the lack of investment.”

But Branson’s tourism market is still healthy overall, according to Seifried: “From a local perspective we’re having a really good year – I certainly don’t want to sound like we’re complaining, we’re not, but it’s incredibly important that we focus on fully funding those tourism campaigns.”

Seifried also said there’s been no downturn in business due to the NAACP’s travel advisory.

“We’ve had convention folks from around the country call [us] with concerns,” he said. “It’s nonetheless a concern to us in Branson that we have our best foot forward when it comes to the concerns of the NAACP, and we want to insure that we’re doing our part with our colleagues across the state to work on those issues.” 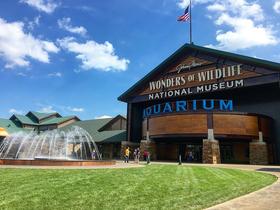 Springfield, 45 minutes up the road from Branson, is the only major tourist destination in Missouri whose hotel occupancy rate went up last year, from 63.9 percent to 65.6 percent. Tracy Kimberlin, CEO of the Springfield Convention and Visitors Bureau, credits the boost to last year’s opening of the Wonders of Wildlife Aquarium and Museum.

He also said the extra $5 million the state got for tourism this year has had an immediate impact.

“We’ll be receiving about $275,000 through the [state’s] cooperative marketing program,” he said.

Tourists continue to come to the Lake of the Ozarks, although the area’s hotel occupancy rate dropped from 50.7 percent last year to 48.1 percent this year. And repeat visitors from some target markets are down as well.

“The state of Missouri had to cut TV advertising – in particular, they cut out advertising in Ohio and then in Chicago, and the numbers reflect that now,” said Tim Jacobsen, executive director of the lake area’s convention and visitors bureau. “We do see where we were making ground in visitors from Ohio, and now we’re starting to see those numbers dissipate … so there’s a direct relation to the [tourism] budget and visitation.”

And St. Louis’ occupancy rate is down slightly, from 67.1 percent last year to 66.3 percent this year. Explore St. Louis lost more than half of its state funding when Greitens cut the tourism budget, which dropped from $475,000 to $217,000 during FY2018. The cut forced the cancellation of a TV ad campaign last summer.

Spokesman Anthony Paraino said additional state funding this year has helped boost the city’s tourism budget, but not back to the same level as it was two years ago.

Of course, plenty of tourists come to Missouri without seeing an ad campaign. Owen Curtis of Alexandria, Virginia, says he decided to visit Missouri after reading a book.

“Undaunted Courage by Stephen Ambrose kind of motivated us,” he said. “We’re doing the Lewis and Clark Trail up to the headwaters of the Missouri.”

Whatever motivates people to come to Missouri makes Franz happy. He hopes lawmakers go along with Parson’s plan to raise the tourism budget back to $20 million and said anything above that would be “gravy.”